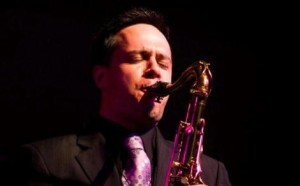 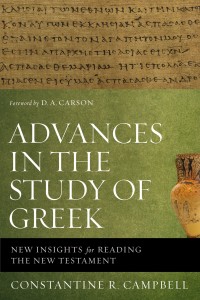 Constantine R. Campbell, Advances in the Study of Greek

This is a belter of a book! In it Con Campbell manages to review and summarise huge amounts of recent scholarship in a form which will be accessible to those with some Greek. He thereby enables such people to benefit from the real advances there have been in our understanding of Greek in the last years. He opens by laying out his hopes and aims (27): to introduce readers to ‘issues of greatest importance’ in current study of Koine Greek; to equip readers to engage with Greek with ‘linguistic sophistication’; to enable readers to dig deeper into scholarship of Koine Greek because they feel competent to do so; to inform teachers of current issues; to enable NT scholars to make more and better use of Greek scholarship; to inspire some to become Greek scholars; and that future editions of this book will include contributions from such scholars. That’s quite an agenda!

Chapter 1 provides a valuable review of Greek studies from the nineteenth century through to ‘the modern era’ (since 1989, when the key recent works of Stanley Porter and Buist Fanning appeared). Campbell provides a fine overview of developments in lucid prose. He has a good eye for key ideas and themes, and gives readers a good sense of the key players and key issues in the field.

Chapter 2 focuses on linguistic theories, sketching how linguistics has grown as a discipline and tracing the major scholars and ideas which have had an impact on Koine Greek studies. He zeroes in, rightly, on the functional linguistics of Halliday and Firth, and notes the NT Greek work of Peter Cotterell and Max Turner, Moises Silva and David Alan Black. He then provides an example, the debate over whether and how time reference is encoded by Greek verb tenses (especially in the work of Porter and Fanning). Campbell himself is a significant contributor to the latter conversation, of course (here and here), so it’s no surprise he chooses this example. That said, he presents views generally fairly, while making his own view clear.

Chapter 3 looks at lexical semantics and lexicography. Since we all use lexica, the developments here are critical. Campbell provides a very clear and helpful introduction to lexical semantics (that is, the study of word meanings) drawing particularly on the work of Moises Silva, whose book Biblical Words and Their Meanings is an outstanding ‘way in’ to this topic. He turns then to John Lee’s work on lexicography (that is, the production of dictionaries), and identifies difficulties with major Greek lexica, including Liddell and Scott (the major Classical Greek lexicon) and Bauer, Danker, Arndt and Gingrich (BDAG), and Louw and Nida (L&N) (the major Greek lexica of the NT), illustrating with specific examples. Campbell also notes important advances, notably the move to definitions rather than glosses, begun by L&N and continued by Fred Danker.

Chapter 4 turns to deponency (my spell corrector switched to ‘despondency’, which is not irrelevant!). Here, Campbell outlines the move away from using this category in Greek, since it is an intruder from Latin studies, and toward studying and teaching the middle voice. This particular field is very much in process, and he sketches outstanding issues which are not yet resolved: ‘mixed deponents’, ‘passive’ verb forms which we translate as actives in English, and the relation of the lexeme used with verb voice.

Chapter 5 is the longest chapter and looks at verbal aspect, the area where Campbell himself has made a major contribution. He presents the areas of agreement and continuing disagreement in this debate, amidst a series of wonderfully succinct one paragraph summaries of the contributions to the conversation. He’s bang up to date here, outlining debate over the force of the Greek perfect tense-form, including a seminar at the 2013 SBL meeting soon to be published. Campbell points to and summarises his own view as presented in his accessible textbook Basics of Verbal Aspect in Biblical Greek, although he doesn’t similarly present Fanning and Porter’s views. That is understandable in Campbell’s work, although many continue to find their two big books too technical to be accessible.

Chapter 6 looks at idiolect (the speech and writing preferences of individuals), genre (different types of writing), and register (‘levels’ of speech and writing associated with particular situations, such as the range from formal to informal). The discussion of idiolect is particularly helpful, looking at the varying patterns of verbal aspect use among the Gospel writers.

Chapters 7 and 8 follow up the sketch of linguistic theories in chapter 2 by looking in more detail at discourse analysis, majoring on Halliday and Hasan on coherence (how a discourse hangs together), and Levinsohn and Runge’s work on the Greek NT itself. Because Halliday and Hasan (ch. 7) have worked with English rather than Greek, Campbell provides examples of the impact their work could have on NT studies. He is not uncritical of them, and offers a short series of caveats to Hallidayan-style analysis, including a call for more work on the NT from this perspective. On Levinsohn and Runge (ch. 8), Campbell gives very helpful summaries and offers valuable critique—although much of the critique is not that they are mistaken,but that their analysis needs to be extended to paragraph and document level (while allowing that they do a little of this). Campbell is cautious of Levinsohn’s use of cross-linguistic parallels, fearful that they might trump the distinctives of Koine Greek.

Chapter 10 turns to learning and teaching Greek. Here, Campbell shows that developments in textbooks, even as recently as Rodney Decker’s Reading Koine Greek (2014), are largely using nineteenth-century models for learning, even if dressed up with PowerPoint and biblical software. He seems enthusiastic about immersion approaches such as Randall Buth’s, and implies they may be the future if we are to preserve knowledge of Koine Greek for coming generations of students who have been told Greek is hard and therefore don’t want to try it.

Each chapter has a valuable and well-chosen brief bibliography of key sources, as well as there being a full bibliography at the end of the book.

Campbell writes clearly, lucidly and accessibly. I loved the jazz and musical images and metaphors sprinkled through the book, drawn, no doubt, from his own musical expertise as a fine saxophonist (see the photo above!). He says this book grew out of an upper-level course in Sydney, Australia, where he formerly taught, and I could see myself using this with third year undergraduates or Master’s students, supplemented by other readings, including NT (and other) texts which would enable students to see where the rubber hits the road in reading the NT. likewise, this book will be very valuable for lecturers, professors and doctoral students who want to update their knowledge of how Greek is now being understood and thought about.

This isn’t a book in which everyone will agree with everything, although most will be persuaded by most of it, I think. It is a book which will leave readers better informed and better equipped to read Koine Greek texts with sensitivity and accuracy.

Full disclosure: the author kindly arranged for me to receive a complimentary copy of the book without any expectation of a review.