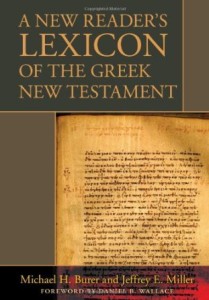 I’m a bit behind in discovering this book, but now that I have, I recommend it warmly to friends who have learned Greek in the past and are puzzling over ‘keeping it up’. The New Reader’s Lexicon gives you the meanings of Greek words found less than 50 times in the New Testament, verse by verse through the whole NT. There are just over 300 Greek words which come 50 or more times in the NT, and these 300+ words cover about 75% of the actual words found in the Greek NT. So if you know those 300+ words, you will only need to look up one in four words (on average) as you read the NT. This is where the New Reader’s Lexicon is just what’s needed, since it identifies and translates those words. For each word, it gives you the meaning in context (based on the standard scholarly lexicon, Bauer-Danker-Arndt-Gingrich, or BDAG as it’s known to its friends), the number of uses in the NT book, in the corpus of that author’s work (e.g. Pauline letters, Luke-Acts, Johannine literature), and in the NT as a whole (statistics are based on the standard scholarly Greek NT text, the Nestlé-Aland 28th edition). These figures mean that you get a sense of how common or uncommon the word is within the NT book, that author, and the wider NT. If you want to see how the book looks, the amazon.com page allows you to ‘look inside’ and see sample pages (alas, not the amazon.co.uk page).

Old hands will think that this sounds like Kubo Sakae’s lexicon, and they’ll be right about that. This is essentially a modernised (using the latest Greek lexicon) and simplified version of that older book. But this is a vast improvement, and drops some stuff from Kubo Sakae that was irrelevant or not helpful.

I’ve been reading through Galatians with my second-year Greek class here in Cambridge, and each week I’ve read through the text on my own with the New Reader’s Lexicon at my elbow, and I’ve been impressed and delighted at the speed bump in my own reading (and I’ve been reading the Greek NT for quite some time). Of course, this book only provides the lexical form of the word, and doesn’t parse the word for you (you’d need either Zerwick and Grosvenor or Rogers and Rogers to do that), but that’s helpful, since it means I still have to think about verb tense, mood and voice and recognise those for myself.

Many thanks to Michael Burer and Jeffrey Miller for the legwork they’ve done on this book—generations of Greek students, and (I hope) ministers and pastors who learned Greek in college and can keep it going using this resource, will rise up to bless them!

Now I need to look at the similar resource that the same publisher has produced on the Apostolic Fathers…and when will something similar for the LXX be available?