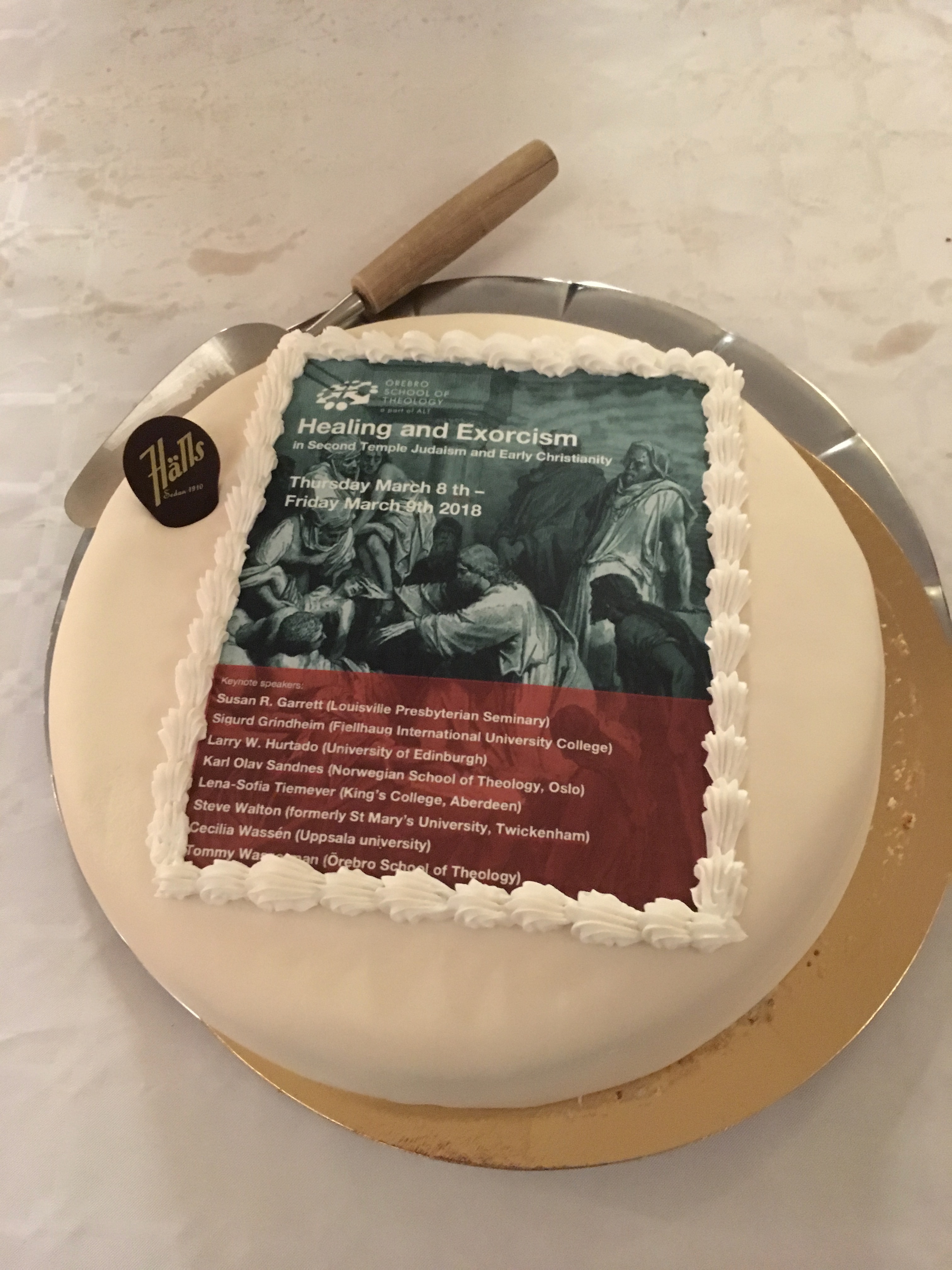 I’m in Örebro, Sweden at a conference on ‘Healing and Exorcism in Second Temple Judaism and Early Christianity’. (The picture is one of the two amazing cakes we had for dessert at the dinner!) My paper is about why Paul silences the demonised slave girl in Philippi (Acts 16:16-18), and I connect it with the silencing of a demonised man by Jesus in Luke 4:33-37. Here are the title and abstract of my paper, and this link will open a pdf of my slides.

Why silence? Reflections on Paul and Jesus silencing demonised people in Luke-Acts

This paper seeks to address and understand the silencing of demonised people through deliverance by Paul and Jesus in two key incidents in Luke-Acts (Acts 16:16-18; Luke 4:31-37).

It is easy to be puzzled at a number of levels by the story of Paul’s deliverance of the slave girl with the python spirit in Philippi (Acts 16:16-18). In particular, she appears to speak the truth about Paul and his companions, and their message (v 17)—and yet by narrating the deliverance of the slave girl, Luke clearly regards the python spirit as providing opposition to their gospel ministry. A variety of interpretations of this story exist. For example: Spencer and Mathews read this story as the suppression of a female voice; Chrysostom proposes that the spirit was seeking plausibility for itself in order to draw away any new believers; Keener notes ambiguities in the slave girl’s words when heard in a pagan context, which (from Luke’s and Paul’s point of view) would require correction; Kauppi doubts that the slave girl should be understood as demonised at all, since there are only two of Bultmann’s standard seven characteristics of demonistation present in this story.

The parallel which naturally springs to mind is Jesus’ silencing of the demonised man in the synagogue of Capernaum (Luke 4:31-37, esp. v 35)—the only occasion in Luke where Jesus silences a demon. As in Philippi, the demonised person appears to speak the truth about the speaker (Jesus), and yet Jesus prevents him from speaking further along those lines. There are considerable resemblances between these two stories, alongside interesting differences.

Through consideration of key features of the stories in conversation with accounts of deliverance from around the same period in the Jewish and Graeco-Roman worlds, the paper will consider what particular point(s) Luke communicates to believing, Jewish and pagan ears through the feature of silencing.

The papers from the conference will eventually be published in the WUNT 2 series from Mohr Siebeck—look out for it!