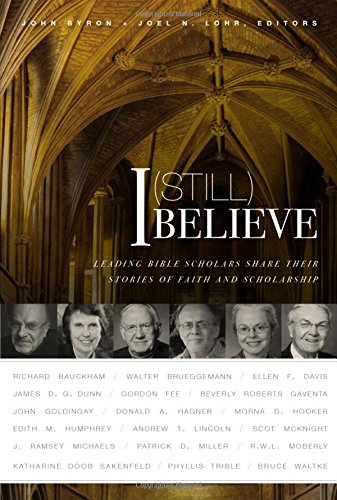 No, not this, but a book of that title which appeared in 2015, edited by John Byron and Joel N. Lohr, from Zondervan. In it a bunch of stellar biblical scholars write about how faith and academic biblical studies have gone together for them. The answers are very, very varied, as you might imagine. There’s a common thread for many of the North American contributors (about ⅔ of the authors) of ‘I grew up in fundamentalism, discovered it was more complicated than that, and here’s how I developed into the mature position I now hold.’ This is hardly true at all for the Brits (the remaining ⅓ of the authors), interestingly, where the US-based battles of fundamentalism and the divides they produced had far less impact.

The positions the scholars now hold are a fascinating range, including Phyllis Trible, who writes, ‘Soon came a change in my relationship to the institutional church. It lost its appeal—a condition that still prevails’ (229), and Walter Moberly’s observation, ‘My night as wrestling Jacob [the night his son was born and he learned that his wife, who had just given birth, had terminal cancer] finally persuaded me that most kinds of theodicy, attempts rationalise or/or justify the ways of God, are futile; the bottom line is that either you trust, or you don’t’ (205). If I list the other contributors as Richard Bauckham, Walter Brueggemann, Ellen Davis, Jimmy Dunn, Gordon Fee, Beverly Gaventa, John Goldingay, Don Hagner, Morna Hooker, Edith Humphrey, Andrew Lincoln, Scot McKnight, Ramsey Michaels, Pat Miller, Katherine Doob Sakenfeld, and Bruce Waltke, you will get a sense of the wide spread of views among the authors—most are broadly theologically orthodox, some would wear the label ‘evangelical’ and some would certainly reject that label.

It’s also interesting to see the range of their self-disclosure, including about their relationship with God. Some hold their cards closer to their chests than others. I was most helped by those who put their cards on the table, notably John Goldingay, Walter Moberly, and Edith Humphrey—and others too. Hearing some of my theological heroes share their reflections and struggles was an encouragement in dealing with my own thoughts and issues.

I’m grateful to the authors for being willing to write about themselves in such a thoughtful way. This will be a book I shall put into the hands of PhD students and thoughtful undergraduate and Master’s students at the point where they’re asking how to hold faith and scholarship together. Bravo, John Byron and Joel Lohr, for conceiving and executing the idea!