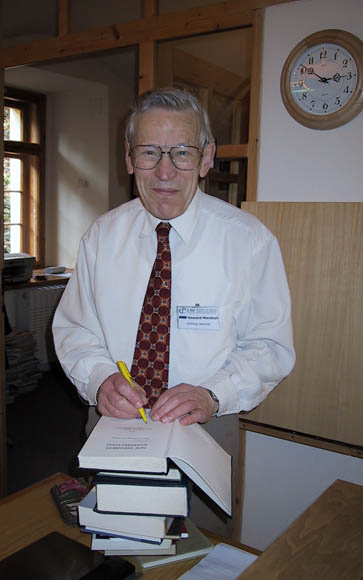 I share others’ sadness (such as Mark Goodacre, Tyndale House, Darrell Bock, and Ray van Neste—and now [21 December] Ian Paul) in reporting the passing of I. Howard Marshall on Saturday 12 December. Howard (as he always asked to be known) was for many years Professor of New Testament Exegesis at the University of Aberdeen, and latterly Professor Emeritus. He was a lovely human being, a delightful Christian man, and an outstanding scholar and teacher—not least of the many PhD students he supervised.

I first met him when I was a young theological student in 1978, shortly after the publication of his magisterial commentary on Luke, and he gave an hour of his time at a conference to speak with me about the undergraduate dissertation I was writing on Luke and Acts. He was gracious, encouraging, and I was delighted to hear him telling me about things which ‘I have recently been noticing’ in Luke’s Gospel—this after just publishing a massive work on the Third Gospel! Here was a scholar who never stopped growing and learning. I later encountered Howard as chair of the Tyndale Fellowship New Testament study group, and again found him a thoughtful, gracious and encouraging person. He was an inspiration to younger scholars and PhD students, and always ready to share his knowledge and wisdom, but without dominating a group or being overbearing.

Perhaps the most enjoyable—and certainly most memorable—connection I had with Howard was to work with him, David Wenham, Stephen Travis and Ian Paul on the two-volume Exploring the New Testament student textbook (see here and here), initially published in 2001 and a second edition in 2011 (SPCK in the UK; IVP in the US). Howard, David, Stephen and I shared our drafts with each other and commented on them: I remember that Howard’s comments were both incisive and gracious, and I learned much from him. It was not a little intimidating to comment on Howard’s drafts for the volume on the Epistles, which were superb, of course. However, he did ask for—and welcomed—ideas for small group projects, seminar ideas and so on, which became the ‘What do you think?’ and ‘Digging deeper’ boxes in the books. It was an honour to work with this man who thoroughly fitted the description ‘a Christian gentleman’.

Howard studied at Aberdeen for his MA, BD, and PhD and, after a short while teaching at Didsbury Methodist College, began teaching in Aberdeen in 1964, being made Professor in 1979. He published extensively, including commentaries on Luke (NIGTC, 1978), the Epistles of John (NICNT, 1978), Acts (TNTC, 1980), 1 and 2 Thessalonians (NCB, 1983), 1 Peter (IVP, 1991), Philippians (Epworth, 1992), and the Pastoral Epistles (ICC, 1999), as well as key books on New Testament Theology and interpretation, including New Testament Theology: Many Witnesses, One Gospel (IVP, 2004)—the latter won a major publishing prize. He also edited the highly (and rightly) influential New Testament Interpretation: Essays on Principles and Methods (1977—and still in print), a book which brought together important work by evangelical scholars and helped me, as a starting theological student in 1977, to approach critical study with thought and care, rather than fear. Another book I recall with great affection from that period is his superb I Believe in the Historical Jesus. To my mind, it would be impossible to read Howard without gaining much.

Howard is one of those rare people who received the honour of two Festschriften. The first (1994), was Jesus of Nazareth: Lord and Christ, edited by Joel Green and Max Turner, and focused on his interests in the Historical Jesus and New Testament Christology. The second (2011), was New Testament Theology in Light of the Church’s Mission, edited by Jon Laansma, Grant Osborne and Ray van Neste, and did exactly what its title said—it contained a wide range of essays engaging with the themes of mission and New Testament Theology. Howard would certainly have approved, for he never forgot the importance of the New Testament as the church’s mandate for its life and mission in the world.

Howard served as President of the British New Testament Society, extending his role unusually for a fourth year, at the committee’s request, to facilitate the transfer to the next President (who was, if my memory serves, John Riches of Glasgow University). When a small presentation was made to him to thank him for his period of office, he was typically self-effacing about his contribution.

I remember Howard as a man of godliness, grace and generosity—I would be delighted if others said of me even a tenth of the kind things many have been saying about Howard. We thank God for him and take courage.

And the title of this piece? C. S. Lewis famously yelled across the High Street in Oxford to Sheldon Vanauken, ‘Christians never say, “Goodbye”’—because believers have the confidence that we shall meet again. Amen to that!