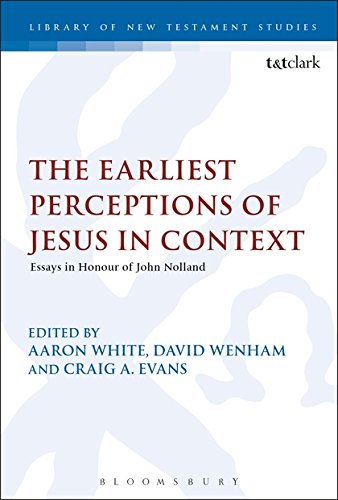 Thanks to Aaron White, one of the editors, for this helpful summary and overview of the recent Festschrift for Professor John Nolland. I was delighted to contribute an essay to this on the ascension of Jesus.

These essays  have been written by a number of friends, colleagues and students, to mark John Nolland’s 70th birthday and to express, on our own behalf and on behalf of many others, our appreciation of John and of his work. They were presented to John Nolland at a meeting of the Tyndale Fellowship for Biblical and Theological Research in Cambridge in July 2017.

The essays range widely over John’s own range of interests. Some essays are very much related to the context of Jesus and of the Gospels: Rainer Riesner’s discussion of the latest archaeological and historical evidence surrounding Nazareth falls very clearly into this category. Craig Evans describes the importance of Livia Julia August, the second wife of the emperor Augustus, not least in the estimation of Philip the tetrarch,  and suggests that Philip’s controversial plan to build a temple to Julia in Bethsaida may be the context of Jesus’ famous promise to Peter, ‘On this rock I will build my church’.

The Gospels themselves are obviously among the earliest perceptions of Jesus to which we have access, and Armin Baum considers the much debated question of the genre of the Gospels, concluding that they are closest generically to Old Testament and Jewish narratology, though with slight influence from Graeco-Roman biography. Thomas Hatina writes of the importance of Social Memory perspectives for an appreciation of the Gospels, considering particularly Jesus’ quotations of Scripture and relating these to the culture and context of the Evangelists.

Most of our essays are studies of the perception of Jesus within the New Testament. Tom Wright argues that Psalm 8 is a key Christological text in the Gospels, and in a wide ranging article explores the text in relation to s to a range of themes from Adam to Davidic Messianism to the son of man, to priesthood and temple, concluding with reflection on the coming of Yahweh and the divine identity of Jesus.

Others focus on particular gospels, notably on Luke-Acts and on Matthew, as is appropriate in a volume dedicated to John Nolland. Darrell Bock explores one particular part of Luke’s Central Section, namely 11;24–13:9,  pointing out the themes of authority and accountability running through those verses. Robert Brawley looks at the characterization of the Pharisees in Luke-Acts, finding the Lukan portrayal of their relations with Jesus to be more positive and less confrontational than has often been recognised. Yongbom Lee looks at Jesus as Son of Adam and Son of God in Luke-Acts, identifying places where  Adamic Christology is important to Luke. Steve Walton focusses on the ascension theme in Acts,  showing its importance with significant implications for the divine identity of Jesus. Christoph Stenschke looks at the missionary speeches of Acts, and notices how Luke, for all his interest in the Gentile world, brings out the Jewish context of Jesus.

Daniel Gurtner takes in both Luke and Matthew, examining the theme of the temple in both gospels, finding a rather positive view. Douglas O’Donnell looks just at  Matthew, examining the vocative kyrie as it is used in addressing Jesus, and concludes that it has divine resonances and it is not just respectful address. Roland Deines offers a rather comprehensive and insightful discussion of the generally neglected subject of the Holy Spirit in Matthew. David Wenham supports those who see the Matthean beatitudes as having a very coherent almost poetic shape, related to their Matthean context.

Of course, the rest of the New Testament apart from the Gospels and Acts gives us insight into the earliest perceptions of Jesus. Craig Smith explores the theme of rest, sabbatismos, in Hebrews and relates it to Matthew 11:28–12:14. Peter Davids looks at James and 1 Peter,  noting many echoes of the traditions of Jesus in both letters,  but explaining how their use of the traditions reflects their particular contexts.

John Nolland’s interests range much more widely than just the Gospels, and indeed than the New Testament.  He has been involved for many years in ministerial training, and it is good to have an article by former colleague Eeva John on ministerial training, relating it to Luke’s portrayal of Jesus as teacher. It is also appropriate to have Eckhard Schnabel’s article on  Romans 12:1, the point in Romans where Paul moves from doctrine into ethics; the article explores the meaning of  worship that is logikē. Schnabel recognizes the strength of the traditional translations ‘reasonable’ or ‘spiritual’,  but prefers to look towards the ‘word’ sense of logos, suggesting that Paul is exhorting the Romans to offer their bodies as a living sacrifice that speaks and communicates with the world. This is an appropriate conclusion to our volume of essays both because John Nolland  has done so much to  help  students to engage with detailed and responsible study of the Greek text (especially in his class on ‘Advanced Greek’ on 2 Corinthians),  and because his interests have included both a concern for mission—for communication—but also for Christian life and  ethics.

In bringing these essays together we honour John as someone who has ‘investigated  things accurately’, so that we may ‘know the reliability of the things we have been taught’ (Luke 1:3-4),  and as a teacher, ‘discipled for the kingdom of heaven, who is like a man bringing out of his treasure things old and new’ (Matt 13:52). He is also a humble and self-effacing Christian scholar who would want to say ‘we do not proclaim ourselves, but Christ Jesus as Lord, and ourselves as your servants for Jesus’ sake’ (2 Cor 4:5).  We are grateful for all his service to us and to many others.

As editors we are grateful to Bloomsbury T&T Clark for their willingness to publish these essays and for all their help in doing so.