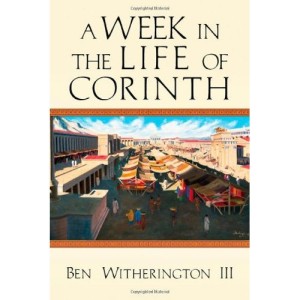 I’ve greatly enjoyed reading this little (158 pages) book  by Ben Witherington III over the last few days. It’s a novel in which he tells the story of a week in the city of Corinth, but it’s no ordinary week. The story features a former slave, Nicanor, who has returned from Roma after a business trip for his ex-owner, now friend, Erastos. Nicanor meets various people, and finds himself in the midst of political intrigue, for Erastos is standing for the office of aedile in the city against an unscrupulous rival, Aemilianus. So unscrupulous is Aemilianus that he has Erastos beaten up and he is very ill, at death’s door.

Meanwhile we meet Paulos (Paul) and Priscilla, and learn about their life in Corinth. This is the week in which Paulos has his hearing in front of the Proconsul Gallio, accused by the Jewish synagogue of acting illegally. Paulos finds himself unexpectedly freed because Gallio sees no charges for him to answer.

Along the way Witherington paints some highly believable characters and tells an engaging narrative, broken up by periodic boxes called ‘A Closer Look’, zeroing in on a particular feature of the situation or culture of first-century Corinth. These are clear, lucid and non-technical descriptions of the social and cultural setting in Corinth as classical and New Testament scholars know them. There are, inevitably, places where one scholar or another will disagree with Witherington’s reconstructions, but the large majority are based on well-informed, mainstream scholarly work.

Ben Witherington has put us in his debt with this little book—it is going high onto the reading list for my second years studying Paul with a focus on 1 Corinthians. It is readable, engaging and well-done, and reminds me of the excellent The Shadow of the Galilean by Gerd Theissen. Bravo!