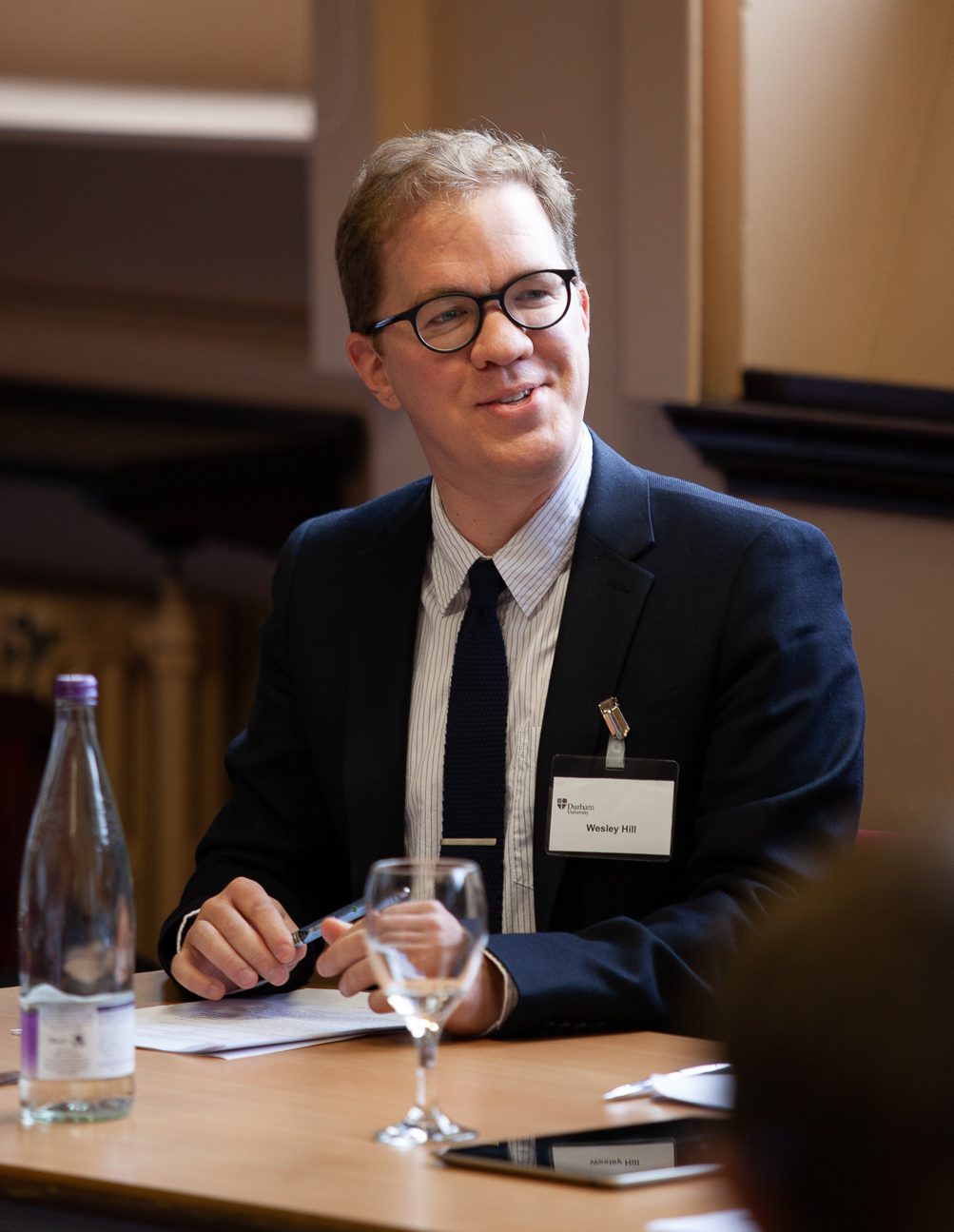 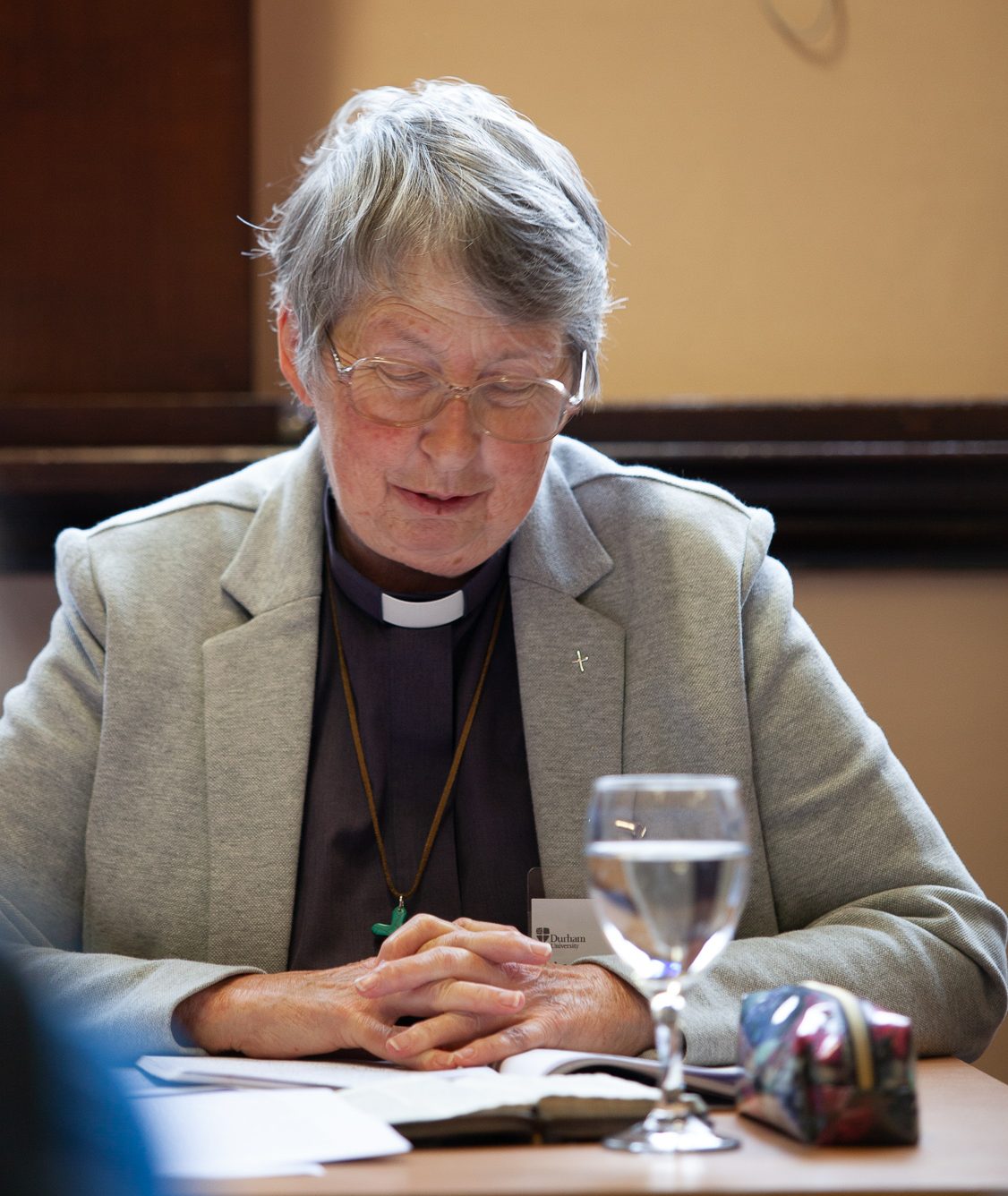 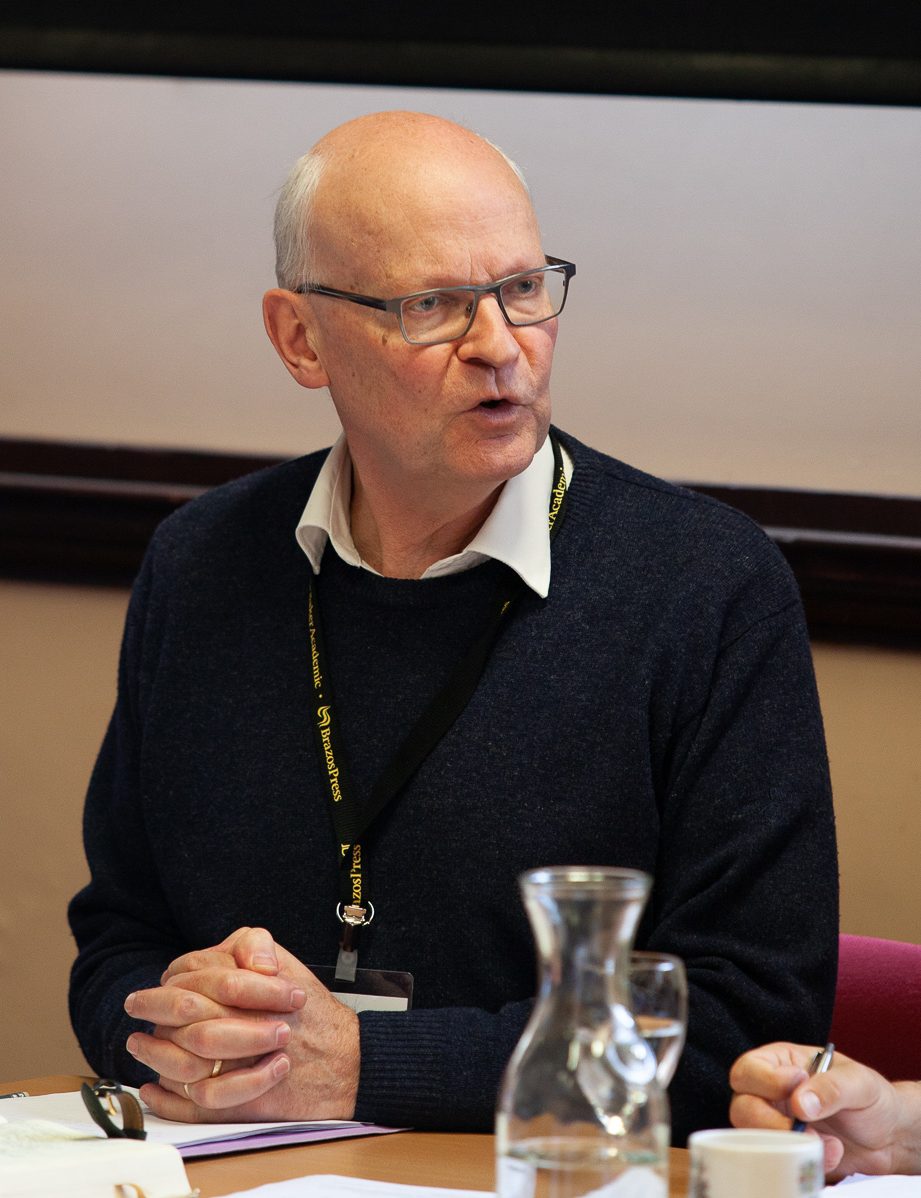 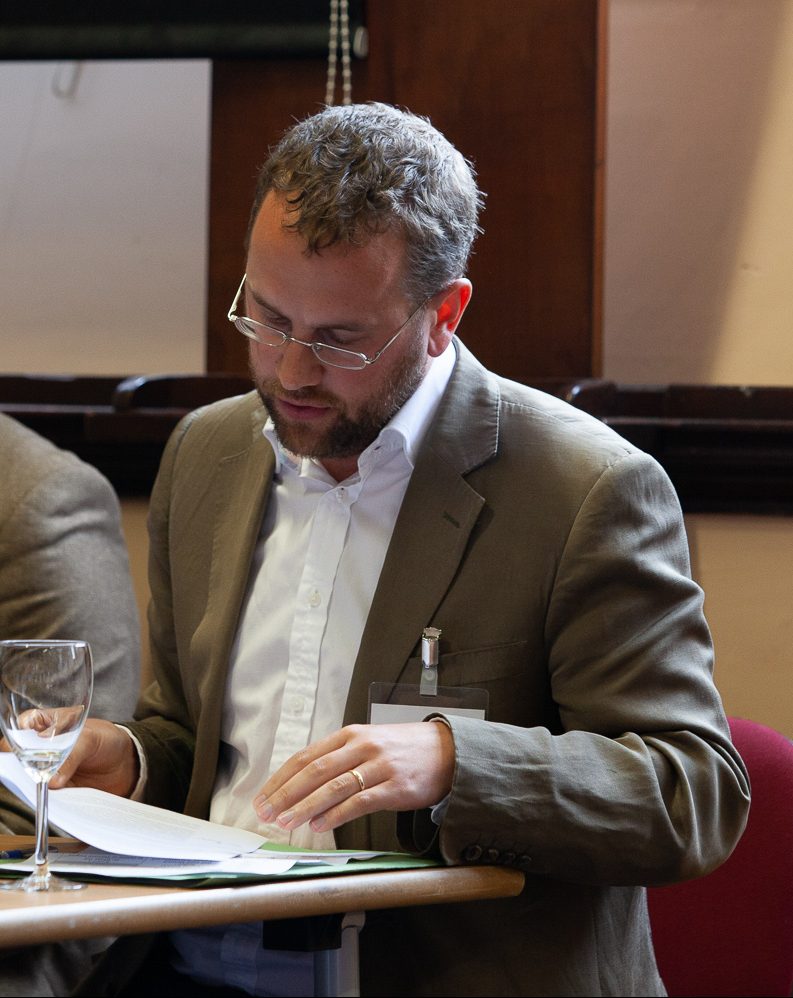 This is the third (and final) post about this conference in Durham. The first two are here and here. Many thanks to Tavis Bohlinger for his excellent photographs of the second day of the conference, reproduced above and below with his kind permission.

Day two started with Dr Wesley (Wes) Hill (Trinity School for Ministry, Ambridge, PA) considering ‘doctrinal exegesis’ by discussing trinitarian theology in relation to the Fourth Gospel, especially John 10:30, 38. He began with C. S. Lewis’ helpful image of ‘mere Christianity’ as a hallway off which a number of rooms stand. The rooms represent the individual Christian bodies: Anglicanism, the Reformed Church, Methodism, Orthodoxy, etc.—and in those rooms are fires, chairs and meals, which the hallway lacks. Hill noted that much ‘theological interpretation of Scripture’ in recent times has been conversation in the hallway which has a nebulous or inchaote understanding of ‘theology’, rather than there being vigorous conversations in the rooms.

Hill then explored two ways of reading John’s key assertions about the unity of the Father and the Son: Richard Bauckham and Thomas Aquinas. Bauckham is a good example of an exegete reading a text with a theologian, for he is indebted to Jürgen Moltmann, notably Moltmann’s ‘social trinitarianism’. Thus Bauckham reads passages such as John 10:30 (‘The Father and I are one’) and 10:38 (‘The Father is in me and I am in the Father’) as signalling that the relationship of the Father and the Son consists in mutual indwelling, and that that relationship ‘actually constitutes the unity’ of the Trinity (quoting Bauckham). The deity (identity) of God ‘consists in the communion between Father and Son’ (Bauckham).

When Aquinas commentates on John, his approach is rather different and (unsurprisingly) more in tune with classical western trinitarianism. In thinking with Aquinas about the same texts, John 10:30, 38, Thomas sees these verses as warding of Arianism (the view that the Father and the Son do not share a common nature) and Sabellianism (the view that the Father and the Son are just two modes of expression of one Being). In conversation with Hilary of Poitiers and Augustine, Aquinas argues that John portrays as Jesus sharing all the power of the Father, for just as no-one can snatch the sheep from the Father’s hand, neither can anyone snatch them from the Son’s (John 10:28-29). Rather than locate the unity of Father and Son in their mutual indwelling, à la Bauckham, Thomas sees John 10 pointing to an underlying ‘essence’ which both share—it is not their relational intimacy which defines their ‘nature’. Rather, the threeness and oneness are ‘equiprimal’ (a word used by Miroslav Volf)—they stand on the same level. The divine essence is singular, and the three Persons are differentiated by their ‘relations of origin’.

Hill then observed the fruifulness in both cases of engaging with the text of John in conversation with theological scholars—in the case of Bauckham, with Moltmann, and in that of Aquinas, with Hilary and Augustine. This approach, of thinking with theologians, rather than its results, was what Hill commended to us (indeed, the exegetical results of Bauckham and Aquinas are incompatible at key points). He suggested that exegetes might adopt a particular theologian as a long-term conversation partner, in a kind of apprenticed relationship. as a way of deepening their theological and historical exegesis of Scripture. He was concerned to reject the ‘relay race’ model of exegesis and theological interpretation (which Grant Macaskill, using Luke Johnson, also criticised), i.e. that exegetes produce the historical interpretation of a text and then hand it over to the theologians who can get on with their work without the bother of reading the biblical text for themselves.

In response, Prof. Loveday Alexander (University of Sheffield) spoke of her experience of meetings of Eastern and Western biblical scholars organised by the SNTS after the fall of the Berlin Wall, in which she learned much from Eastern (primarily Orthodox) scholars, notably concerning the importance of history—including, importantly, the church’s history—for exegesis. She observed that the two examples Hill offered were examples of engaging in front of the text, looking at the text through the lens of its later interpretation, rather than the concerns of historical criticism, which focus behind the text, on its formation, language, social and cultural contexts, etc. She observed that such approaches reconnect us, as scholars today, to an older tradition of doing exegesis in conversation with the wider church (including the church triumphant) as part of a living tradition.

Prof. Walter Moberly (Durham University) presented the last of the formal papers, a masterly study of Psalm 82, one of the more difficult psalms to access and interpret. He offered a close reading of the Hebrew text, reflecting on how the psalm might be appropriated for Christian thought and practice today.

The psalm portrays a ‘heavenly council’ of the gods with Israel’s God, here known not by the covenant name yhwh, but the generic Elohim—the term also used for the ‘gods’ who gather in v 1. He explained that modern Hebrew philologists now reject the claim that Elohim can refer to human judges, an understanding deeply rooted in traditional Jewish readings, and so we must regard v 1 as a ‘council of the gods’. This, of course, creates the difficulty that today’s Christians reject such a scenario, for they believe there is only one true God. Moberly suggested that this language is situational, that is, that it reflects how people in ancient Israel saw the world—the fact was, there were lots of gods around, and Israelites knew it because of their neighbours of other ethnic and religious persuasions.

Moberly went on to argue that it is appropriate to read the use of Elohim for Israel’s God and the other gods, for the psalm offers an assessment of the various gods around and finds the other gods wanting because they do not act justly, but favour the wicked and the powerful (vv 2-4). He then read v 5 as a view of those on earth: ‘they’ are in darkness and trouble because of the antics of the other gods—life is bleak and incomprehensible for those who follow such gods. The corruption these gods allow and encourage pushes justice out of reach.

A key exegetical move is then to recognise that in vv 6-7 there is a (rather common) Hebrew idiom which states ‘I said/thought…but in fact’ (ʾamarti…ʾaken). This signals that the first view expressed is now known to be mistaken and has been replaced by the second view. Thus we should translate (with the NJPS translation):

I had taken you for divine beings, sons of the Most High, all of you; but [I now know] you shall die as men do, fall like any prince. (my italics and square bracketed phrase)

Thus, the error being corrected is the assumption that the ‘gods’ of the nations were in fact truly gods. But the reality is that they are not, and it is their injustice which shows this to be so.

The implication of this for hearers/singers of the psalm is then spelled out in the last verse (v 8), which calls on God to act in justice and (by implication, since people are made in God’s image and called to imitate God) also calls on Israel to act in the way in which their God acts, justly. To pray Psalm 82 necessarily involves pray-ers in committing themselves to seek and administer justice in this world.

Moberly brilliantly noted that entering into such a situation is not beyond the wit of people today, for they are used to entering into imaginative scenarios nothing like life now, whether in Star Wars or the Avengers. The problem, he suggested, is that Bible readers today approach reading imaginative texts with ‘a certain kind of woodenness’ which limits their reading to ‘Did this actually happen?’ or ‘How could God be so stupid as not to realise that the other gods were not gods, and then only twig to it later?’ (I’m paraphrasing Moberly considerably here).

Dr Angus Paddison (University of Winchester) responded and particularly commended Moberly’s tone: eirenic, rather than combative. He noted how Moberly’s careful attention to philology and exegesis led to fruitful theological interpretation of the psalm. He wondered if Moberly was advocating that historical criticism had an authority over the exegesis of the text such that it provided an acid test for good theological interpretation. He also wondered (and the subsequent discussion explored futher) where Jesus might fit in the interpretation Moberly had offered. 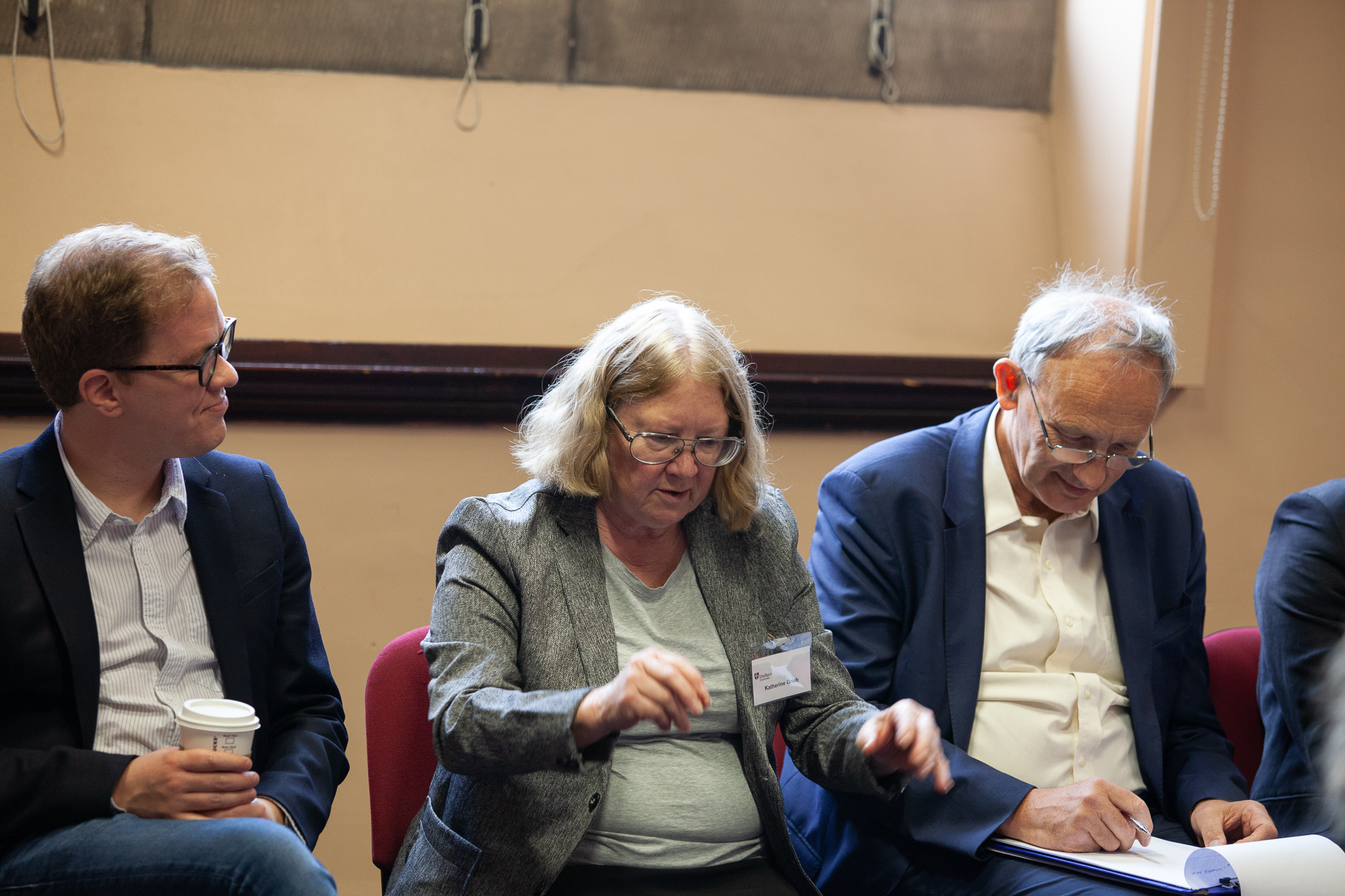 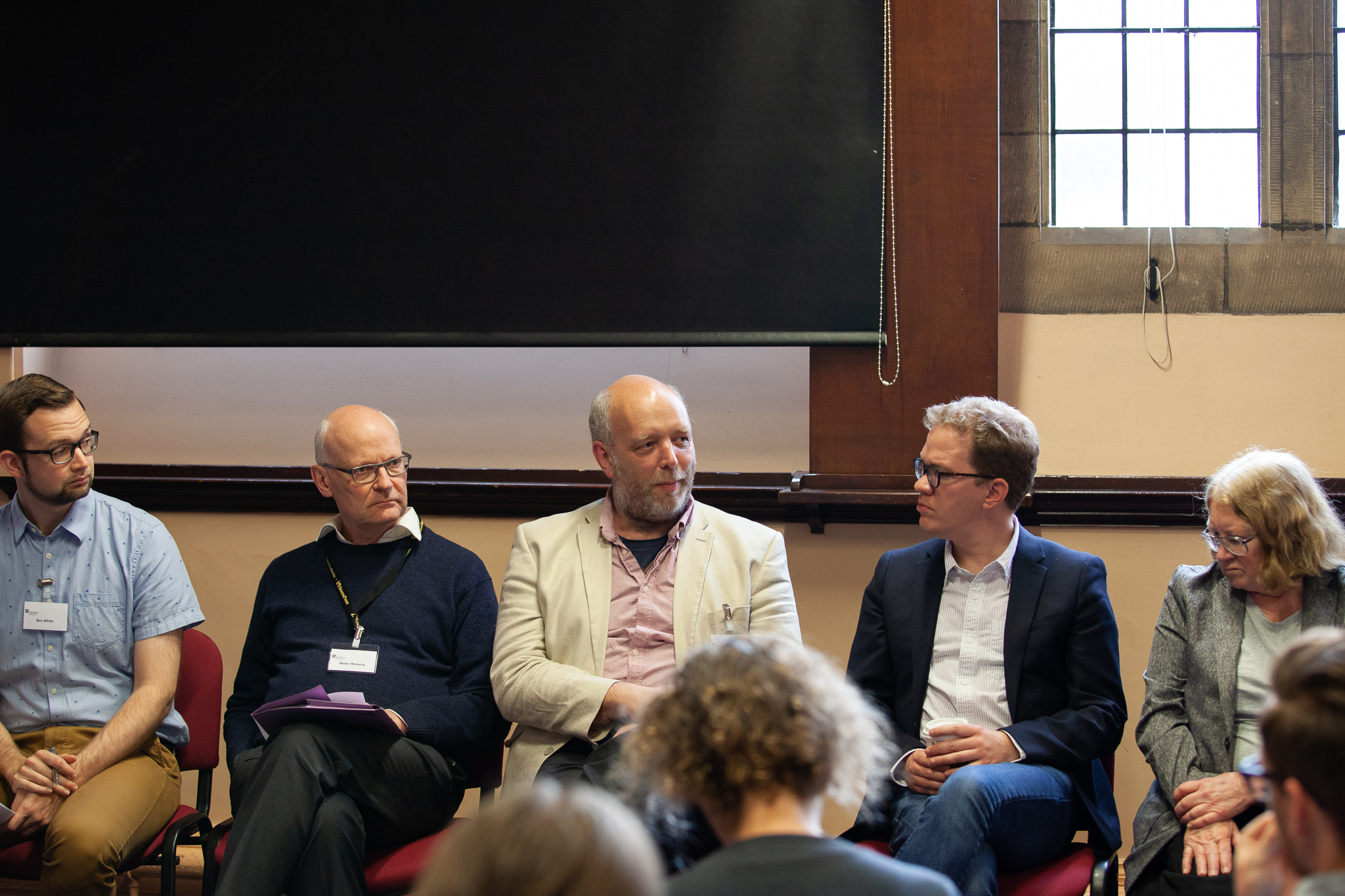 A closing ‘round table’ [photos above] brought the conference to a close, with each of the paper presenters contributing short reflections on the conference, followed by questions and comments from the respondents, and then the conference delegates at large. Along the way, I got to ask what might be the characteristics of a good historical and theological interpretation of a text, and got responses which were very helpful on the process of reading: Walter Moberly spoke of living with a text over a long period (he reckoned it took ten years of teaching Deuteronomy to really make sense of the Shema in Deut 6:4); Kathy Grieb spoke of slowing down our reading by engaging with the original language text, by performance, by praying the text, and so forth, to enable in depth engagement; and Wes Hill commended reading and hearing good examples, citing Tom Weinandy’s recent Jesus becoming Jesus as such an example. 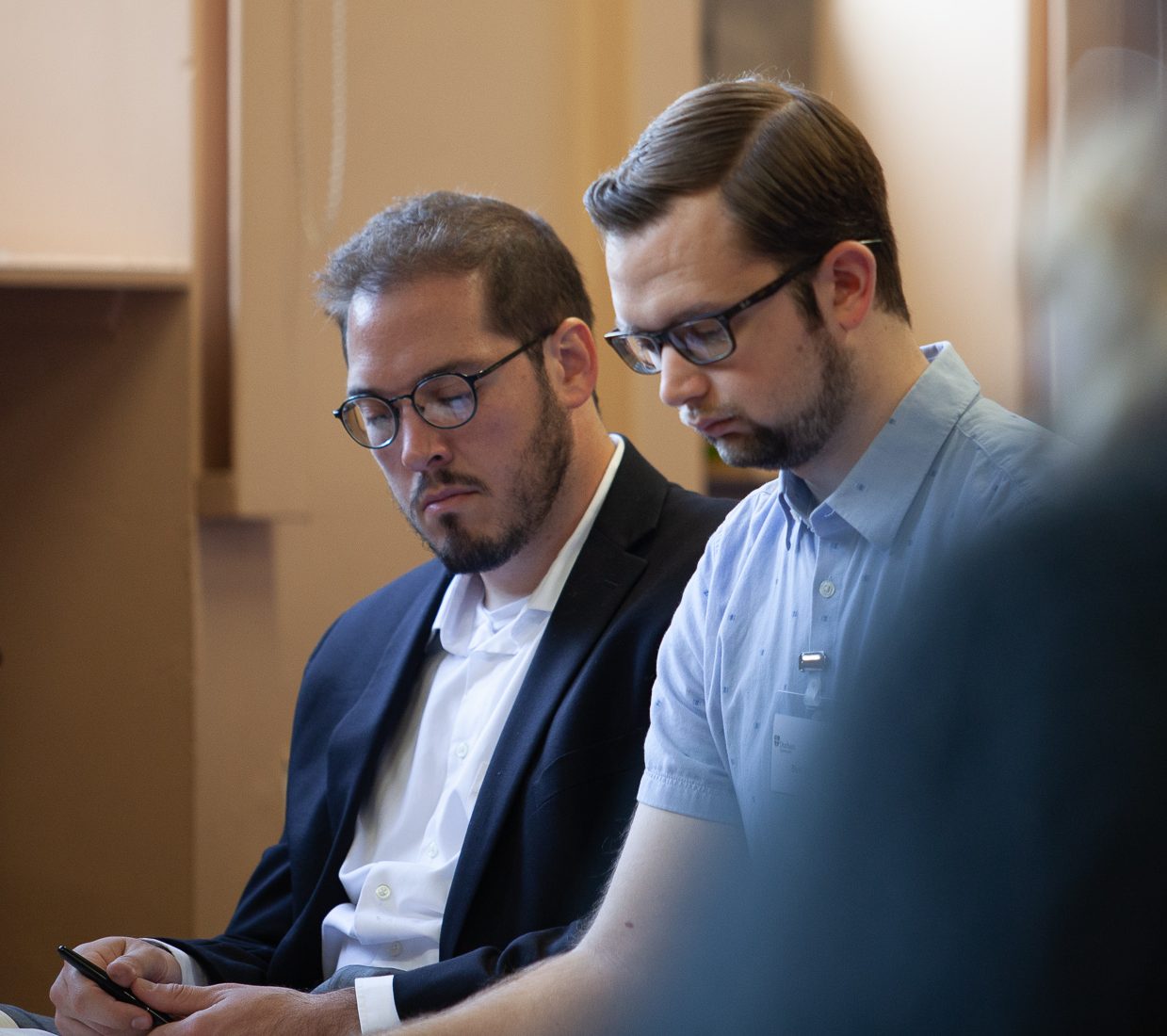 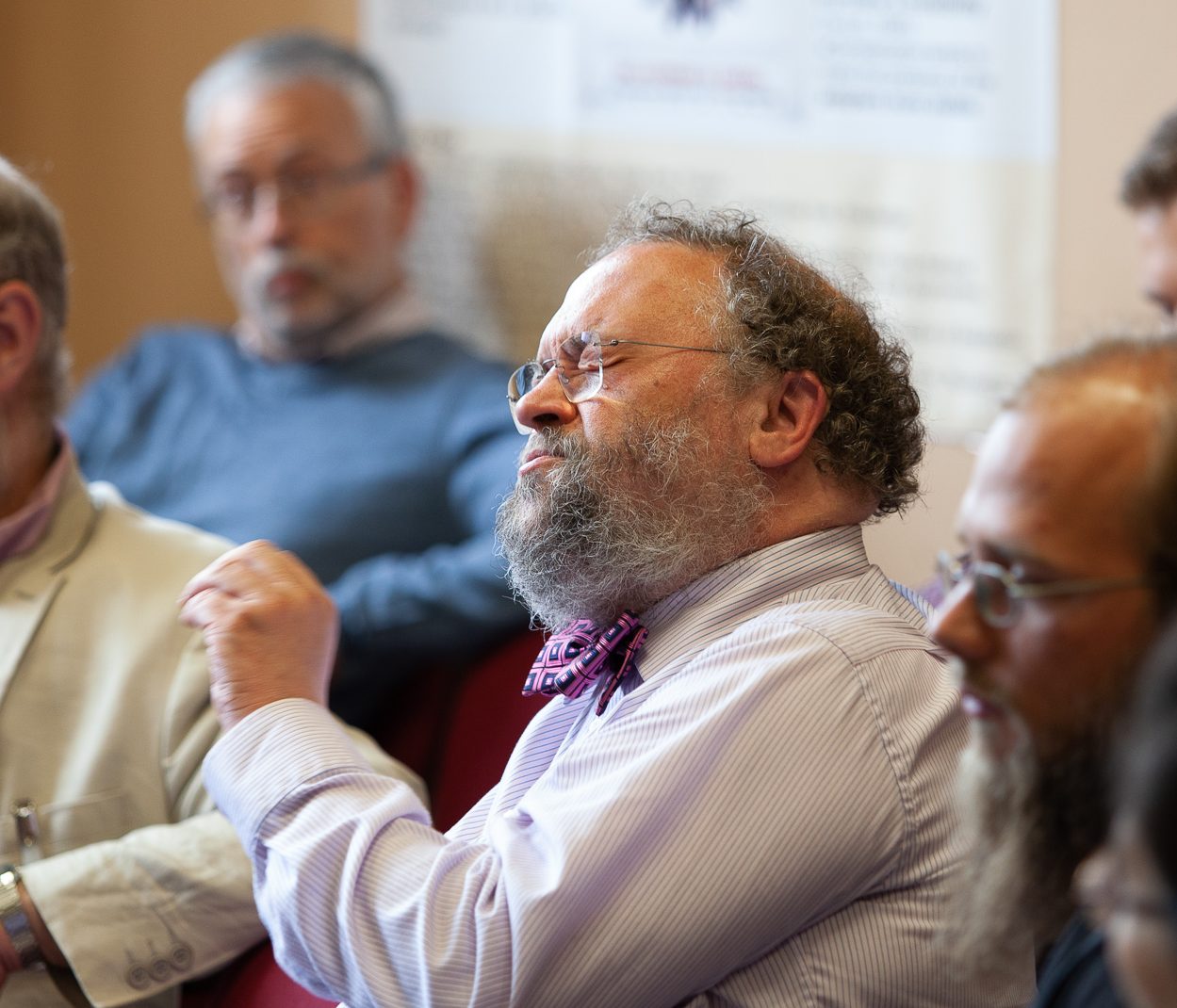 [Photos: Justin Allison and Ben White, the architects of the conference; and your correspondent asking a question which clearly required deep thought, with Francis Watson looking on, although out of focus.]

This was a first-class, well-focused conference with high quality input and conversation. It has left me with much on which to reflect, not least the experienced reality of conversation which modelled beautifully the participants’ assertions that conversation is crucial to good historical and theological interpretation of the Bible. Many thanks to Ben White and Justin Allison and their team of fellow-research students for putting this together!

For a briefer summary by Justin Allison and more of Tavis Bohlinger’s photos, visit this page.