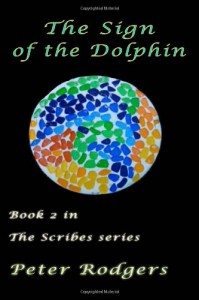 Peter Rodgers kindly gave me free access to the Kindle version of his second novel about people involved in copying New Testament manuscripts in the second century AD. This is textual criticism made wonderfully accessible in narrative form, and a great read.

Peter Rodgers is Vicar (Pastor) of St Andrew’s Episcopal Church in Antelope, California, and teaches New Testament and Preaching at Fuller Theological Seminary. He’s a delightful man, and has much to answer for in having taught me Greek during my theological studies in Cambridge many moons ago. 🙂

The story is told through a series of letters dated in AD 184 between a number of Christians who are travelling to Britain on mission and Justin and Rufus in Rome. Marcus is part of  team led by Bishop Eleutherus who are going to Britain; others are Callistus, Hippolytus (15 years old at the time). Marcus has considerable amounts of what we know as the New Testament memorised, and is a scribe who copies and writes manuscripts.

The group journey from Ostia in Italy through France to Britain, ending up in the far north, near Hadrian’s Wall. Along the way they meet various groups of believers, as well as unbelievers who are interested in the Christian faith. Some of the believers have access to some of the apostolic writings; others do not, and one of the team’s concerns is to provide such writings, which Marcus writes out from memory. Along the way they encounter a number of difficulties (I won’t spoil the story by telling you about them), and also meet copies of the New Testament manuscripts which differ from the ones they are using—Marcus is aware that there are different manuscripts around, and this book features quite a lot of discussion arising from the two main variant forms of the Acts of the Apostles (which modern scholars usually called the Alexandrian and Western forms).

Meanwhile in Rome there are real issues arising for the believers: a woman believer is part of the imperial household and faces challenges in living there; a bishop is under threat; there are tensions with the Jewish community—all of these are thoroughly believable and probable issues for this period.

The portrait Rodgers paints of the earliest Christians is realistic to my eye. He shows the incursions of gnosticism and other variant forms of faith. He includes disputes over some matters, including whether the Scriptures should be translated into the native language of the British (rather than Latin or Greek). He includes some well-drawn issues arising from Marcus’s single state, and two women to whom he is attracted. The early Christian gatherings are portrayed with care, and known characters from church history are drawn realistically (e.g. Irenaeus, whom they meet in Lyons).

At the end of the book are notes on the chapters, and it is well worth flipping to these after reading a chapter (the chapters are quite short), to see the scholarly resources and issues which Rodgers has drawn upon to put his story together. There is a wealth of helpful material here, which would inform students (and remind forgetful scholars!) of the background to the features of the stories. For future editions, I wonder if there might be hyperlinks in the Kindle version to allow a reader to flip back and forth quickly (this is easy in a print edition, but not so easy in an electronic edition).